A BRIEF HISTORY OF THE FALCON PUBLIC HOUSE, DRIFFIELD

Although known for most of its history as The Falcon or The Old Falcon, this historic pub in the very centre of Driffield was originally known as The Dog and Duck when it was first listed in the Universal British Directory in 1727.

A John Collier acquired the tenancy by 1833.

The freehold was bought by a local bank manager called William Jarratt  in 1844, who transformed the premises. He rebuilt the pub on the same site and it is this rebuilding which exists today. He also developed the land behind the pub as Driffield’s cattle market. By 1848 he had renamed the Dog and Duck as ‘The Falcon Inn’ and, as an Inn, presumably let rooms.

The nineteenth century business of the pub was closely bound up with the cattle market. The Market sold cattle and sheep from a 12 mile radius and by 1856-58 was ranked among the best in Yorkshire, with pens capable of holding 200 beasts and 1,500 sheep. In 1858 alone some 30,000 head of cattle were sold there. William Jarrett successfully built up the cattle market and the Falcon Inn together, and their customers were often one and the same. The cattle market permanently closed as the result of the foot-and-mouth disease outbreak in 2001 and was sold two years later.

The Falcon continued to be let by the Colliers until c. 1860. The pub was used as the setting for inquests and the landlord organised from it athletic sports in 1871 and pigeon shooting in 1880. It was the headquarters of the local conservative party in the historic general election of 1868, when Benjamin Disraeli fell from power to be replaced by William Gladstone. This was the first general election when the majority of men first got the right to vote following the elections reform act of 1867.

In 1889 Robert Chadwick was the landlord.

In 1897 W. O Jarret, the son of William Jarret who had died in 1875, as the freeholders sold the pub to John Smith’s brewery of Tadcaster, together with the nearby Market House.

In 1937 the licensee of the Falcon was C. R. Kirby, who was the secretary of the Driffield Agricultural Society and played a leading role in the development of the annual Driffield Show. He was also the honorary secretary of Driffield Cricket Club.

On January 25th 1985 The Falcon Inn was designated a Grade II listed building by Historic England.

In the early twenty first century it was renamed The Middle Pub until 2021, when it became The Butcher’s Dog. Above and to the rear of the property are five private flats which were formerly rooms when the pub was an inn. 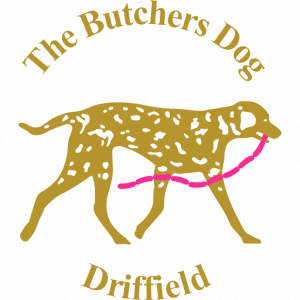 This website uses cookies to improve your experience while you navigate through the website. Out of these, the cookies that are categorized as necessary are stored on your browser as they are essential for the working of basic functionalities of the website. We also use third-party cookies that help us analyze and understand how you use this website. These cookies will be stored in your browser only with your consent. You also have the option to opt-out of these cookies. But opting out of some of these cookies may affect your browsing experience.
Necessary Always Enabled
Necessary cookies are absolutely essential for the website to function properly. These cookies ensure basic functionalities and security features of the website, anonymously.
Functional
Functional cookies help to perform certain functionalities like sharing the content of the website on social media platforms, collect feedbacks, and other third-party features.
Performance
Performance cookies are used to understand and analyze the key performance indexes of the website which helps in delivering a better user experience for the visitors.
Analytics
Analytical cookies are used to understand how visitors interact with the website. These cookies help provide information on metrics the number of visitors, bounce rate, traffic source, etc.
Others
Other uncategorized cookies are those that are being analyzed and have not been classified into a category as yet.
SAVE & ACCEPT